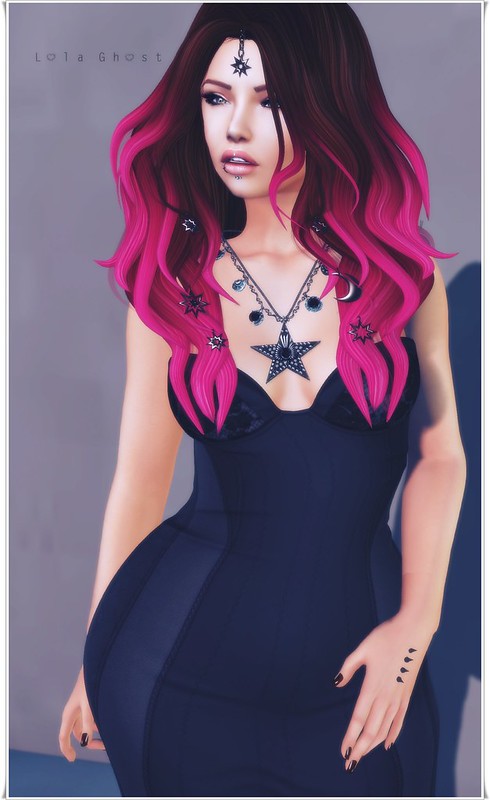 Just a quick post tonight to show you some goodies from the Soho Market.  I was in the mood for this cute hat from Xen’s Hats. I had a bit of trouble finding a hair style to work with it, but it does have a re-size hud to make it easier. Despite this I still had to edit some hair out, but overall an cute accessory for that sassy look.

Then I wanted to show you the shoes from Loordes of London. It is available in three colors (black, bronze and smoke). These also come with a re-size hud and perfect for that classic, sexy look.

Then I have blogged Dark Wing yesterday, but I decided to do it again today. Try this leather outfit, with 4 different breast appliers to feel super sexy!

Oh, oh, oh annnd I made the poses! Can you tell I’m feeling accomplished! LOL

Sometimes you just need to listen to the right music to find the right inspiration.

Vox Mortis has opened a store on Market Place and this dress is one of the items he has up for sale. You should go look. 🙂

I don’t do meme’s often, mostly as I’m not sure people really want to read about me and my Second Life is pretty boring really. But I decided to do this one created by Strawberry Singh.

1. Which was the last sim you visited? (other than your home): Pink Fuel – I really, really need a skin change and I was going from North to South, East to West across the grid in my search. Pink Fuel is where I decided to call it a night.

2. Does your avatar look like the real you? Yeah nah… *smh*. I think she may look like something I would like to look like, except not so plastic! Would love to be as short though.

3. Do you wear underwear/panties underneath your clothing when out and about on the grid? I used to more often when mesh was just released and half the grid didn’t have mesh enabled viewers yet, but now mostly only when I see that I may flash someone.

4. If you won a million linden dollars, what would be the first thing you buy inworld? I would buy a course on how to make mesh furniture in Second Life. I would love to buy more country chic furniture , but I can’t seem to find what I’m looking for, so I want to make it. If you know of any stores out there selling it, let me know!

5. Have you ever bought something in SL and then realized afterwards that you had already owned it from before? Yup, this has happened once or twice, maybe more. At this stage the more I try to arrange  my inventory, the more gets unarranged. Since I’m doing more events, it gets more and more unarranged!

7. If you could go out on a date with any other avatar, who would it be? I have to honestly say that I have no answer to this question.

8. Who, in your opinion, was the greatest avatar to ever slive? Okay so he had a few and yes, I love the look of each of them. Mr Jake Mason.

9. What is the most embarrassing thing you’ve ever done inworld? Way to many to put here!

10. If your avatar had a mind of its own, what do you think it would say to you? Stop being a hermit!

Now for some good news! The Thrift Shop is actually open one day longer! The top I’m wearing is available at the Masoom stand and the pants is a new release from Pixelites – available in a wide range of colors and its available now at the mainstore.

Yes, I am on a trashy sim. I stalked Ziki”s blog and found a post on this sim. It is wonderfully rustic, broken,  dirty and messy.

Sometimes it is hard to look at all the broken dirty things around us, and we’d rather look the other way. Sometimes you keep hanging on to things that really does not add benefit to your life, things that drag you down. But then there are some things that are broken and abandoned and there are still so much hope for those, the trick is to know the difference and to stop looking away and pick up those left behind. You are more needed that you know.

Today while exploring this amazing sim, I decided to wear the new release pants from Delirium with the Te*fy t-shirt from collabr88 and sneakers from Balkanik.

Searching through what seemed like a lost territory at a far, far away sim. I found abandoned, fallen houses and roads overgrown.

The more I explored, the more I fell in love and I realized if you are willing to search, sometimes the perfect frame is waiting to be found.

Also a something I fell in love with is this new dress from Zanze, available from The Thrift Shop,  which frames the shape from a new store that just opened, called Candy Drops!  This shape I’m wearing is Annabella. I combined this with the Poppy skin from FreshFace.

PS. This photos was taken at Leap of Faith. It will only be open for next week, so if you would like to take the opportunity to check it out, do so soon 🙂

I went to Gawk to find those torn stockings I have been seeing in so many blogs. And as normal I wondered through the whole store. There are so many nice stuff, but most of it is not mesh. I would be very excited to see the mesh if they do make some. Anyway, I saw this dress and really liked it. So for once I’m not wearing mesh. The shoes I had for a long time and I think it goes well with the dress.

I went shopping with Nic yesterday and he chose this top for me. I really liked it, especially the back. Hope you guys will too. 😀